The bi-annual W. A. & Martha Stone Family Reunion was held today. This event was held in Byars, Oklahoma. Byars is where my grandparents, W. A. & Martha lived, farmed and raised their family. They had eight children, with my father being the sixth child. 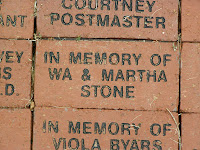 Byars celebrated 100 years of township this past year. As a fund raiser a small plaza of memory bricks were placed in front of the Community Center. The brick to the left is in memory of my grandparents. (My grandfather, William Alexander Stone, was the leader of the town for many years and the namesake for my oldest son.) There are also bricks honoring all eight of their children and their spouses.

Both of my grandparents and the first five of their children have passed on. My dad and his younger brother and sister, Dale and Levata, are all that is left of their generation to head up this clan. There were 23 children born to my generation and many of these were at the reunion today. Dad had the best turn out with all four of his sons, with their wives, in attendance. 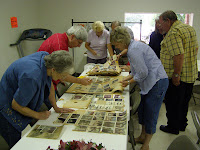 as served and there was plenty of food. Also, my cousin Jim brought these huge photo albums that his dad had kept with many old family pictures. (Jim is the son of dad's older brother Delmar.) Jim had inherited all of these photo's when his parents passed on. He made them available to everyone to take all the pictures they wanted that pertained to their own families.

A good time was had with all of us visiting and catching up on family news. Although these reunions tend to get smaller with each passing year it is fun to gather together every so often.

A visit with the girls 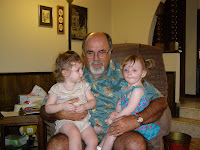 The mothers of our grand daughters finally figured out we were home, even though we've been back a week. We had them both here this afternoon for a visit along with their mothers. We had a good visit and the two girls had a big time chasing each other through the house and screeching. 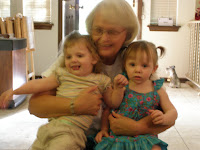 Although they are about the same size Emma, sitting on my left, is about five months older than Aurora. We really enjoy spending time with these little girls but they can wear out us old folks pretty quickly. That is why it is a good thing that God gives children to young people and not us old foggies.

Although we throughly enjoy our travels, and I really don't like sitting at home, we do miss seeing our little girls on a regular basis.
Posted by Rick Stone at 01:37 2 comments: