Fun night at the theatre

Favorite niece, dinner and a play. Does not get any better.

" tonight with my wonderful niece, Carrie. We met at her grandmothers house after she got off work. (Her grandmother is also my mother-in-law.) After she changed for a night out we headed to Romano's Macaroni Grill for a good Italian dinner. Carrie says she really enjoys when I take her out to dinner because she gets to have something beside hamburgers or other fast food that her family insist on having. Also, so far, she had never been to any of the places I've taken her. After dinner we headed down to Lyric on the Plaza to see the play "Spring Awakening". This play was very different than the normal fare that we are used to seeing done by Lyric. Not sure everyone in the audience was prepared for this show since several people did not stay after the intermission. My friend, Jonathan Beck Reed, led the cast in this show and did his regular outstanding job.
(Sorry the picture is a bit blurry. This was taken by my 91 year old mother-in-law and she tends to shake a bit.) As usual when I'm doing something with Carrie I had a great time. Looking forward to the next occasion.
Posted by Rick Stone at 23:30 1 comment:

This this is Spring Break for the schools in the Oklahoma City area I thought it would be fun to take some of my granddaughters to the Zoo. All last week the local TV weather guessers were predicting rain for this week, starting late Monday night. So the Zoo outing was planned for Monday. I originally planned to take the youngest of the girls, Cadence, who is five and her nine year old twin sisters. (The twins are actually step-grand kids but we have decided to leave the "step" part out. Since both of their natural grandpas have passed away they have decided they enjoy having one to do things with.) Aurora, my middle granddaughter who is six, was also invited to go with us. After thinking it over I decided taking four active little girls for an all day outing by myself was probably not a good idea so I informed my son, and these girls dad/step dad, that he was going with me.
As it turned out the weather guessers guessed wrong. The storm came in Sunday night and we woke to massive rain. Plans immediately changed from the Zoo to the Oklahoma City Science Museum instead. (This museum used to be called the Omniplex in years past.) This is a hands on interactive museum that is ideal for children. It also has a domed IMAX type theater so we took that in also. We started off by all going for a late breakfast at IHOP and then out to the museum. The girls were very well behaved and all seemed to really enjoy themselves. After several hours exploring all the exhibits none were really ready to leave. Around four in the afternoon we loaded up and headed to McDonald's for a late lunch/early dinner. 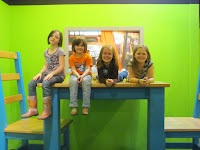 The IMAX movie was called "Tornado Alley" and was a documentary about the area from South Dakota down through Texas and was done by the group of Storm Chasers that work for the Federal Government. It gave the appearance of being in the center of the tornado. There were mixed emotions from the girls. The twins really got into it. Catlyn was mesmerized by it but Madison was a bit frightened and wound up squeezing my arm all the way through it. Aurora was somewhat frightened but then got bored and Cadence was bored all the way through.
After our stop at McDonald's we headed home. Dropped Aurora off at her mom's house and then took Alan and the other girls home. Wound up hanging out for a little while at their place. I enjoy being with these kids so much it is hard to let go. It was a good day by all and I promised them we would make the Zoo on another day.
Posted by Rick Stone at 22:30 2 comments:

Happy Birthday to my best friend

This is Buddy Joe's birthday. At age eleven that would make him 77 years old in "dog years". It is hard to believ 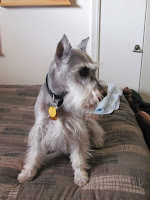 e that this fiesty little guy is actually an "old man". He has brought much joy to our household over these past years. Buddy has been a great companion in our travels and always loves to go in the RV. Here's wishing my little friend many more birthdays.

Happy Birthday to my Mom

Today is special. This would have been Maskell L. Stone's 93 birthday.

On March 4, 1919, one of the finest women to ever grace this earth was born. She went on to be a great wife, mother and grandmother and is missed by all who knew her. At the time of her death in May 2011 she had, in addition to her husband of 74 years, four sons, nine grandchildren, eight great grandchildren, and one great-great grandchild. The standing joke was that our Mom was a petrified weed, since her maiden name was Weed but she became a Stone.
Thanks to our Dad's job she got to travel throughout the world. During that time she traveled to almost every state in the union and many foreign countries. After many years of these travels she tired of it and let Dad go on many of these trips alone or with one of his employees. She did enjoy traveling to Hawaii and they were able to visit there several times. They also came to Alaska to visit while my brother, David, and I were both stationed there with the Navy.

On one of her many visits to Hawaii.
My mom was one of my best friends and I miss her dearly. On this past Friday my Dad and I went to the cemetery and installed a retractable flower vase in front of her tombstone, along with one at my dear wife's marker. We left a bouquet of red roses for Mom. Although she has been gone since May of last year my Dad says there is not a day that goes by that he does not look over to her recliner and expect to see her sitting there. 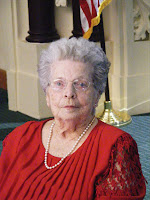