New addition to the Stone Family

The Stone Clan here in Oklahoma got a major addition today. This afternoon The Judge arrived in all his glory at two pounds and eleven inches. Now I've just got to hit the local Wal-Marts to find stuff to feed this baby. 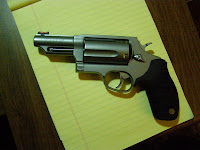 To give an idea of how big this baby is that picture was taken on an 8 1/2 x 14 inch legal pad. The Judge is made by the Tauras Arms Company and will fire either .45 caliber bullets or .410 gage shotgun shells. The shotgun shells would work much better if it ever had to be fired inside a motor home, stopping an intruder but doing much less damage to the coach than a large caliber bullet. Since it has a five round cylinder maybe a couple of .410 shells in the first two spaces followed by three .45 slugs. If the buckshot does not stop them then the .45's definitely would. Currently this little baby is resting snugly in the gun safe along with it's many siblings.

No travels, just an update

We are still home bound for awhile. Have not had our coach out of storage since last November. We are both itching to get back on the road and away from this cold weather. After recovering from the Christmas Eve blizzard, that dumped 14.1 inches of snow on us in about eight hours, we thought we might be through the rough weather for this season. Unfortunately that was incorrect. Thursday of last week we had an ice storm hit was leaving about two inches of ice. Then on Friday the snow moved in and dropped around eight inches on top of the ice. It took several days for the streets to thaw out and we still have plenty of snow on ground.

We are still doing our best to help our folks. Jo's Mom still shows to be cancer free. She has decided that she should not be driving any longer, although she still have her car sitting in the garage, so Jo gets to spend her time driving her to doctor's appointments, grocery shopping, etc. My folks are also about the same. My Mom continues to be in good physical health even though her days are spent sitting or sleeping. Dad is wrapping up his service to Oklahoma Farmers Union/America Farmers and Ranchers. He first began working for them in the early 1950's and served as President for 24 years. He has served on their Executive Board for that last several years but is not seeking reelection to another term. I've been working with one of the organizations executives in putting together a video of Dad's life that will be shown the last night of the convention weekend after next.

Our grand daughters are still doing fine and are growing rapidly. Emma had sur 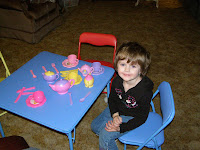 gery recently to repair a birth problem with her belly button. She is now in Kindergarten this year. Aurora spent the day with us recently and we had a big time as she continued to serve make believe tea. (The tea set that is in the toy basket seems to be a big hit with all the girls.) Cadence spent the night with us for the first time last Saturday. She played tea party all evening. The picture is of Cadence, who will be three on the 19th of this month.
Posted by Rick Stone at 20:07 2 comments: