A cat in a hat, a pumpkin, a vampire and a cheerleader. 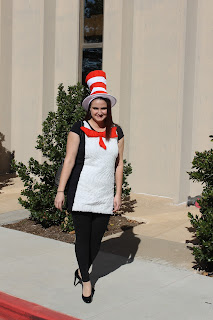 Another Halloween has passed with all the ghost and goblins coming out into the night.  Started off with having lunch with The Cat In The Hat.  Actually, it was my niece Carrie.  Her office had a costume contest today.  Last year she had made a Cat in the Hat costume for her son, J.J.  This year she made one for herself.  This picture was taken in front of her building when I arrived to pick her up. 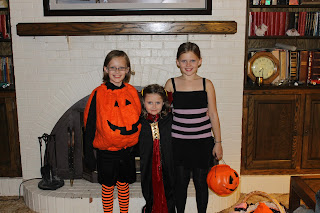 This evening I set up for the Trick or Treaters but they were slow in coming.  Most years we get a few starting around 6:00 PM and they are usually all gone by 7:30 or so.  Tonight it was not until after 7:00 that the first ones showed up.  There really were not all that many kids coming through the neighborhood at all.  Each year the numbers get less as more and more churches, schools and businesses have activities for the children.  Youngest son, Alan, and his family came over.  While he stayed at the house to give out candy Cathy and I took the girls around my neighborhood.  Only about every third house had their porch light on, indicating they were open to Trick or Treaters.  Tonight Katlyn was a pumpkin, Cadense was a vampire and Madison was a cheerleader.  They had already hit the neighborhood near where they live so by the end of the night they pretty much had their "pumpkins" full of candy.

Today is little Bridgit Jeane's birthday.  In actual years she turned three today.  I've always been told that one dog year equals seven years in human life*.  So, is she three or twenty-one?  For the last year I've said she was either a "terrible two" or a "mouthy teenager".  (She does like to bark, much to the consternation of my next door neighbor.) 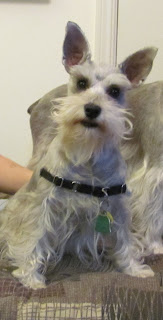 She was born in Savannah, Georgia, and adopted by a family there.  After a little less than a year they wound up abandoning her.  At least they did take her to their Vet but never returned to pick her up.  After a month the Vet turned her over to the Chatham County Animal Shelter.  That is where my high school friend came to the rescue.  Diane (Burks) Abolt is the head of the volunteers for the shelter.  Little Bridgit, who then had the name Tru, never saw a cage at the shelter.  Diane immediately took her home with her and then contacted me.  In November, 2010, after a few weeks of trying to get a way to bring her to Oklahoma, with no success, Joanne and I got in the car and drove to Savannah.  We left Oklahoma City area on a Monday morning and were back home by Friday.  Spent two nights in Savannah, with Diane and her husband Russ.  Since then Bridgit Jeane has become a member of the family, even being totally accepted by, her now, older brother Buddy Joe.

When I'm up late, which is most nights, Bridgit lets me know it's time to turn out the lights and go to bed by covering her eyes so she can sleep.  At that point she goes to her kennel box for the night. 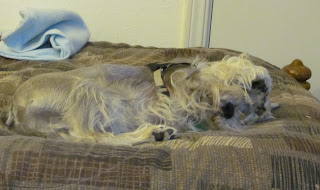