New statues and plants for the entryway.

Working flower beds and taking care of plants has never really been my thing.  My Dad always had beautiful flower beds but that did not rub off on us boys.  Taking care of these things at the house here always fell to Joanne.  She also had numerous house plants that she would move out into the entryway every spring and bring back into the house in the fall.

A couple of years ago we had some hedges and ground cover removed from the entryway area and filled it all in with river rock.  We debated back and forth about what we wanted to put out there.  I wanted a big eagle statue but Jo vetoed that.  Instead we put two large flower pots there with smaller pots sitting in the middle of them.  Each spring she would put in some new flowers in both the large and the small pots.  So far this year all that was in the pots were left over dead plants from last year plus some weeds that had sprouted up.  Also several large weeds were coming up in the bed that goes across the front of the house.

Earlier in the week I went up to Statuary World in Edmond to see if I could find a good eagle statue that I liked.  Not only did I find an eagle but also a great little statue of a sailor.  I bought both and today installed them in front.  I removed the smaller pots and put the new statues in the middle of the big pots.  A trip to a garden shop this morning got me a flat of petunias to plant in the big pots around the base of the statues.  I also brought out Jo's house plants that survived even with the lack of attention over this winter.  Four of them survived and I put some petunias in the pots of the two that did not.  (Earlier in the year, before I left for Florida last January, I gave the biggest and best plant to my next door neighbor.  It was a huge Aloe Vera plant that Joanne and raised from just a small cutting several years ago.)  I also removed the large weeds that were sprouting in the bed out in front of the house.  There are several of the plants that Joanne planted over the years that are coming back in full force so that bed will take care of itself.  (The central sprinkling system we had put in last year keeps that front bed watered over the summer.)

So, Joanne's large flower pots are still there and now have some color added and I have my eagle.  The eagle and the sailor are both facing the flag pole in the front yard.  The sailor statue has a pose of "hand salute" so it is appropriate that he be facing the flag.
Posted by Rick Stone at 16:16 1 comment:

Happy Birthday to my Dad 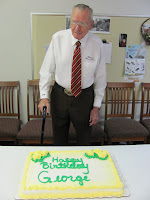 Today is the anniversary of the birth of, what I feel, is one of the greatest men to ever populate this green earth. George W. Stone was born on April 17, 1919, in Byars, Oklahoma, where he lived until he got married in 1937 and moved to Oklahoma City. The third youngest of eight children (five girls and three boys) he now is one of only two still living. He spent his younger years working the farm in Byars where the family lived.

Anyone who knows me very well also knows that my Dad has pretty much been my hero all my life. He also functioned as a mentor over the years, especially in regards to decisions I made in business and all of my working life. He set an example for his family and pretty much expected us to follow that example. He has always been there when one of us faltered along the way, there to pick us up and dust us off and help us get back on the right track. I feel very fortunate to have had the parents that God blessed me with. (Like every other occasion now this is his first birthday without my Mom since it has been less than a year since she passed away at age 92.)

Birthdays are not something that was celebrated in our family. There were four boys in the family and three of us had birthdays fairly close to Christmas. In the early years, especially when Dad was in the ministry or when he was starting out with his work for Farmers Union, there was not always enough money for birthday and Christmas presents. Christmas always won out. As a family this was just an accepted fact and birthdays really were not seen as that important. (My attitude has been pretty much that I did not do anything special to get born. If anything, my Mother should be the one celebrated on my birthday since she did all the work.) Of course, the family attitude towards birthdays did not always sit well with the daughters-in-law that came along later. Each of us four boys had to adjust our attitude as was needed to keep peace in our own houses.

Although today is Pop's actual birthday we chose to celebrate it this past Sunday. Oldest brother, Bill, and his wife Nancy provided the cake and ice cream. My youngest son and his lady, Cathy, along with their five year old daughter, Cadence, went with me to the assisted living center in Purcell where Pop now lives. We were set up to serve the cake and ice cream as soon as the center residents finished their noon meal. There was plenty of cake to go around and everyone enjoyed the treat.

So, Happy 93rd Birthday to one of my favorite people and hope to spend many more over the years.
Posted by Rick Stone at 12:25 1 comment: