Last trip out in the coach for the year 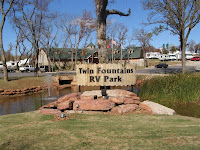 en out with our local RV club, the Birds of a Feather, this weekend. This is our final meeting of the year and is our last time out in the coach. We actually are only about ten miles from the house at Twin Fountains RV Park here in Oklahoma City. We came over around noon this past Thursday and got set up in our site. My oldest son, Alex, works just a few blocks from here so he came over Thursday night and went to the Oklahoma County Line bar-b-que restaurant with us for dinner. 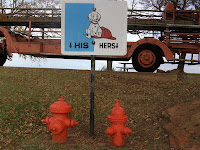 in the clubroom provided by the RV park. Later we ran some errands and made a trip back to the house to pick up some things we forgot. In the afternoon we joined the other club members for a trip to the Oklahoma Firefighters Museum and Me 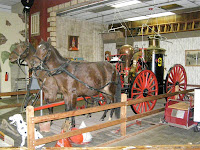 morial here in Oklahoma City. This is a wonderful place that has been put together by retired firefighters from around the state. We have been meaning for some time to make a trip over there but had not gotten around to it. This was a fascinating tour and is highly recommended to anyone visiting the City. They have had to enlarge the museum a couple of times over the years as more fire companies donate their antique equipment. During the evening we all met at a Golden Corral restaurant for dinner. Before this we made a run back to the house to pick up some more stuff we forgot and then picked up Joanne's mother to join us.
Saturday stated with coffee and donuts again and then we pretty much relaxe 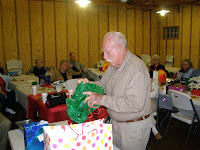 d for the day. In the late afternoon the group all got back together for our traditional end of the year/Thanksgiving dinner. After dinner we had a game of Dirty Santa as our gift exchange. Later we moved into the main part of the building, which had a nice fire place, and most of us watched the Robin Williams movie "RV". A few of the guys sat off to the side and watched the Oklahoma State/Colorado game on television. Another fun weekend with the Birds and a good way to close out the camping year.
Posted by Rick Stone at 00:35 1 comment:

Another year, another birthday

Well, another year in my life has passed as I celebrated my birthday yesterday. I had received a coupon, via e-mail, for a free gourmet burger at Red Robin. We recently discovered the local Red Robin place when they sponsored an on-line game I've played. After our first visit I had signed up in their customer appreciation club. I have twice been e-mailed coupons for free food, once when I first registered with the site and then for my birthday.

Anyway, this birthday was one of the big ones. I can now claim full senior citizen status as I turned 62. Already signed up for Social Security and received the approval. Am scheduled to receive my first check in January. Not sure if I should feel any different as an official senior citizen since I've been getting the senior citizen discounts for some time. Most places offer the discounts starting at age 55 or 60 but with my gray beard very seldom does any one even ask if I'm eligible, they just give it to me.
Posted by Rick Stone at 22:28 1 comment: 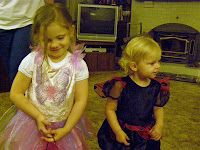 little different this year in that we had more trick-or-treaters than usual. With so many churches and schools having activities on this night most of the kids go there instead of canvassing the neighborhoods. We also had visits from two of our grand daughters. First Emma, our oldest, came by with her half-sister, Lily. They are both a joy and we like having them around. Emma was dressed as a butterfly but had grown weary of her large wings by the time she arrived at our house.

A little later Aurora, our second oldest, came by with her cousin Tye. Aurora was d 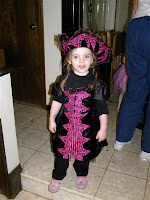 ressed as a Pirate in a really neat costume. All the kids were pretty tired out by the time they arrived but were also hopped up on sugar from the candy they had been eating. They did settle down to relax in our entry way for a little bit. Our dog, Buddy Joe, really enjoys when the grand daughters come to visit but he prefers they com 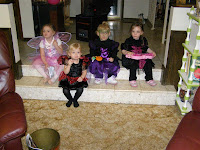 e one at a time. When we get several together he kind of stands back. Also, we didn't get to see Cadence, the youngest of the three, tonight.
Our grand daughters are Emma Dawn, who turned three this past July; Aurora Marie, she will be three in January; and Cadence Rae, who will be two in February. As stated, they are a joy but also a handful for us older folks.
Posted by Rick Stone at 00:42 1 comment: