We've had a landscape crew here for the last week or so completely redoing our backyard. We have really wanted the wood deck and swimming pool removed for some time and now was a good time to get it done. Here is a series of pictures as the work progressed. 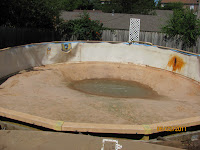 First picture is of the pool after the liner was removed. This pool went from four feet to seven feet deep and held 22,500 gallon 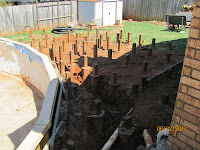 s of water when full. The next shot is of the support polls that held up the 800 square of wood deck. Each of these post were set in two feet of concrete and had to be removed using a chain attached to a Bobcat machine. 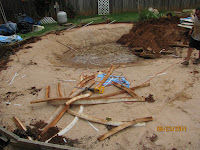 Next, the pool is gone and they have started filling in and attempting to do some leveling of the yard. It took seven dump truck loads o 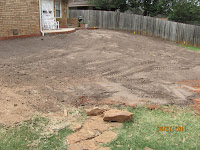 f fill dirt plus two loads of top soil to get the yard ready for new grass. To the right is the yard after the dirt was put in, just waiting for the new sprinkler system and new sod.

And here is the f 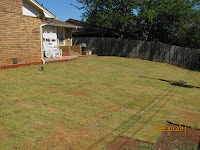 inished product. We not only have a usable backyard we also have a complete in ground sprinkler system in both the back and front yards but also down the side of the house where we have consistently had trouble getting grass to grow. I think we are really going to start enjoying our yard. 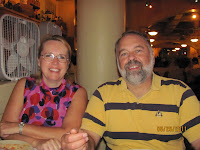 Jim and Peggy Girch, have been over in Shawnee at a RV rally. They represent a Texas company that manufactures and sells power sun shades for RV windows, along with other things. They wrapped up the rally yesterday and then moved closer to Oklahoma City. We met up with them in downtown in the Bricktown area for a chance to show them some of our fair city.

First stop was at the Land Run of 1889 monument. This is a collection of larger than life size statues depicting the opening of the Unassigned Lands t 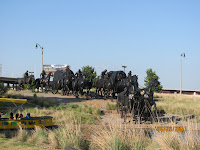 o white settlers. This is an on going project that will have a total of 45 statues when completed. We ar 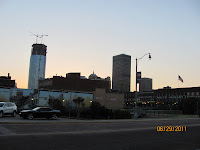 e always amazed at what has been added each time we go down there. This monument is located between the Bricktown area and the Oklahoma River, formerly known as the North Canadian River. We also got a good view of the Oklahoma City skyline as the newest building is going up. That building, the Devon Energy Tower, will top out at 50 stories when complete.

After seeing the monument we took a stroll up the canal through Bricktown and had dinner at one of our favorite Italian restaurants, Zio's. After dinner we got in the car and drove around some of the refurbished areas of the city and then stopped at the Oklahoma City Bombing Memorial. The bombing museum was closed for the night but the outside grounds were open. This is our first time at the memorial after dark when all the lights are on. It is a very beautiful, serene place.