Anyone who knows me very well knows that I hate cold weather. Also, extre 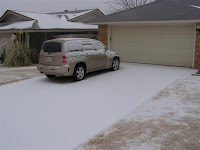 mely hot weather but I can take the heat over the cold. The start of 2009 has really been up and down here in the Oklahoma City area. It has ranged from the 80's down to the teens here in January, often in the same week. It started getting cold again this past weekend and now is really cold with ice on the ground, mixed in with a little snow. This picture shows what we have today. Although that looks like snow it is actually sleet and it is still coming down.

We are having to keep the house warm using the central heat system instead of the wood burning fireplace/stove. After the chimney fire we learned that we have several cracks in the flue tiles and cannot use it until a new liner is installed. We had a guy out last Friday to measure for the liner but have not heard back from him on doing the work. Doubt he wants to be climbing on the roof in this kind of weather. In the meantime I can almost feel the monthly gas bill increasing as the furnace seems to never shut off.

On cheerier note: Joanne and I have pretty much recovered from pneumonia as has her mother. Also, after the latest PET Scan we have learned that Joanne's mother is now cancer free. Not only is that good news for the mother-in-law but also for us in that we can start making plans to get back out on the road in the RV. That means I've got to get this fractured elbow healed enough to be able to hookup and unhook the RV and drive the thing. There definitely is a fracture in the Radial Head in the elbow. I'm scheduled for a CT Scan tomorrow morning to see how bad it is since it was hard to tell from just an x-ray. If it is under a certain size then they do not have to operate and just let it heal on it's own.

As you can see, we have already had a full 2009 and it is not even past January. As has been mentioned in previous post there is not much place for us to go from here but up.
Posted by Rick Stone at 16:23 2 comments:

I've always been told that things happen in threes, especially bad things. Started off 2009 with a really bad case of pneumonia. While I was laid up with that we had a chimney fire that has pretty much ruined the chimney, even though our fantastic local firemen took great pains to keep their damage at a minimum. So I've been waiting to see what else was going to happen.

Didn't have to wait long. Late this afternoon, while attempting to put the Christmas tree and other decorations in the attic, the step where I was standing on the drop down ladder broke, throwing me to the floor. In an effort to break my fall I reached with my left arm, landing heavily on it, jamming my wrist and elbow. Had x-rays taken in the Emergency Room but they could not really tell if anything was broken. There is definitely some damage in the elbow. I already have an appointment with my regular doctor on Wednesday, a follow up to the pneumonia, so they gave me the x-rays to take to him.

So here I sit, typing with my right hand only, my left arm in a sling and fairly high on prescription pain killers. The third event has occurred so maybe the bad stuff is behind us for this new year.
Posted by Rick Stone at 23:05 4 comments: 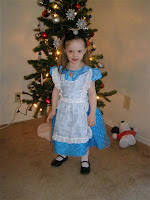 day was our middle grand daughters third birthday. Her mother had her party today and there was in attendance eight or nine little girls, all three and under. Fortunately for us "old" folks they all got along fine and a good time was had by all. Aurora is very into the Disney Princesses so that was the theme of her party. All the little girls were provided with Princess hats and gloves. 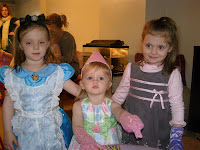 having all three of our grand daughters in the same place at the same time. Pictured here are Aurora, age 3; Cadence, age 2; and Emma, age 3 1/2. Without trying to be a bragging grandpa I must say these are three of the most fantastic little girls we could have ask for.
Posted by Rick Stone at 16:43 2 comments:

Without bad luck we'd have no luck at all

If being laid up with pneumonia was not bad enough we got to call out our local fire department tonight. After dinner we had settled in to a relaxing time in front of the TV and some computer time. Joanne had built a nice fire in our fireplace/insert. In a little while she heard popping from outside and on investigation we found our chimney on fire. Flames were pretty much roaring out the top and a thick black smoke was falling over the neighborhood. After observing it a while I decided I'd better call the fire guys. I closed the dampers on the stove insert immediately. This did snuff out the fire in the box and did not continue to feed the roaring fire in the chimney.

The benefit of living in a small town, even though we are almost completely surrounded by Oklahoma City, is the reaction time of the local officials. By the time I got out in the front yard our local police were there, all three cars that were on duty. Right behind them was the Warr Acres Fire Department and they were soon joined by the Bethany Fire Department, our adjacent town.

The fireman did a quick job of putting out the fire and checked out the house, including the attic, to insure it had not spread. They then spent the next couple of hours cooling down the chimney to insure it would not flare back up. Normally in a situation like this they would pull the chimney down or, at minimum, pull most of the outside brick off. These guys did a great job of keeping the damage down and only removed some of the mortar between the bricks so they could spray water inside. After they left it was hard to tell they had even been here. We did get a little water in the living room, that came in under the stove, that got on the carpet. It should not be a major problem to clean up.

Our chimney opening is very large. Jo's dad, who was a retired brick mason, said it was the largest flue he had ever seen. Due to this it was almost impossible to clean with normal chimney cleaning tools. Due to that it has not had a good cleaning since we have lived her, over 19 years. Since we use this fireplace/insert to augment the heat throughout the winter months there has been a lot of wood burned in it over the years. The creosote buildup finally got to the point of causing the fire. We'll now have to get out a professional chimney cleaner to take care of it. We do have a local company called Mary Poppins Chimney Sweeps we can call.

All seems to be well now but the two hours I found myself standing out in the cold, night air was not good for my lungs. We'll have to see if this causes any setbacks in my recuperation.
Posted by Rick Stone at 23:00 3 comments: