A day at the park 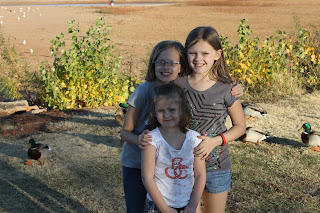 The weather here in the Oklahoma City area has been very un-November like.  Today it was in the high 60's - low 70's with plenty of sunshine.  Decided it was time to get out and enjoy it.  With the Thanksgiving holiday this past week most people had a four day weekend.  Additionally, most schools have been out since last Wednesday so the kids had a five day weekend.  That would mean that youngest son, Alan, and his lady, Cathy, have been cooped up in an apartment for five days with three rambunctious little girls.  So, I headed over this afternoon and "kidnapped" the girls and headed out to Stars & Stripes Park on the south side of Lake Hefner.  On the way to the park we stopped at the grocery store and picked up a loaf of bread to use in feeding the birds that inhabit the area.  The picture is of the ten year old twins, Katlyn and Madison, and five year old Cadence. 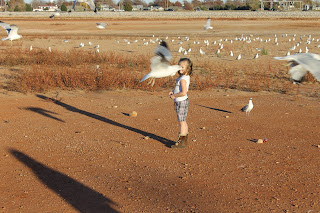 Usually there would be a large gaggle of Canadian Geese out here.  (These geese have pretty much quit migrating south and seem to live in our area year round.)  But, no geese today.  There were a bunch of ducks and, of course, the enormous number of gulls that hang out around the lake.  The girls had a big time pinching off pieces of bread and tossing it to the birds.  In most cases the gulls will swoop down and catch the bits of bread in midair. 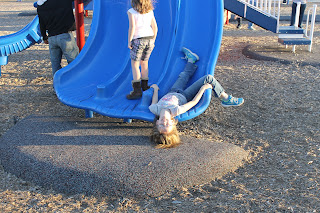 Once the bread was gone it was time to move on to the main part of the park and to the large play equipment.  The girls had a big time climbing on the equipment and using the slides.  This gave Grandpa a chance to sit and relax on the "geezer bench" for awhile.  The play equipment in the park is relative new and can handle several kids at a time.  This was good because due to the great weather the playground was teeming with little ones today.  The girls played until around 5:30 when the sun started going down.  At that point the temperature started to drop pretty fast. 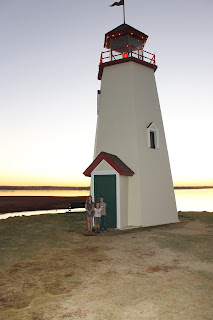 On the east side of the lake is a lighthouse replica that I've been meaning to go photograph.  Since the girls had never seen it this was a good time to go get a picture.  This is located in an area of several upscale restaurants.  We drove around to the restaurant parking area and then walked out to the lighthouse.  The sun was pretty much down by this time so did not get a good sunset picture of it.  We did walk on out behind it to take somewhat of a picture of the sunset.  These pictures also show how low a level the lake is right now.  Our area has been experiencing a real drought for the past couple of years and the lake levels are drastically down.  In the marina just to the south of the lighthouse there is no water and the docks and many sail boats are sitting in mud, with several almost laying on their sides. 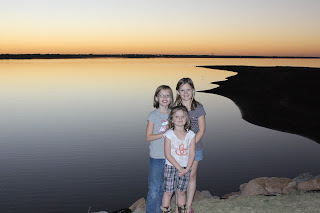 The dark area behind the girls (on the right of the picture) is now dry land.  In normal times that area would be completely under water.  Since this is one of the city's main reservoirs (and the one that we receive water at my house) it is really crucial that we get rain in this part of the country.

Lot's to eat and good company.

We celebrated a day of thanksgiving in this country.  This is a day where most people gather together with their families to give thanks for the blessings that have been bestowed on them.  This usually includes a large meal and in most cases the meal is set out around a large roast turkey.

As we did last year, my mother-in-law and I drove out to Midwest City to be with Carrie and her family.  As most folks who follow this blog know Carrie is my niece, by marriage.  She is also my mother-in-law's granddaughter.  Again, the day was spent at Carrie's in-law's house.  Mike and Barbara Carpenter have been very gracious in including us in their family activities this past year.

The meal was fantastic, with both turkey and smoked ham plus all the trimmings.  There was nine of us at the table.  In addition to Mike and Barbara, Carrie and John and their son, JJ, we also were joined by John's sister, Kathy, and her two sons.  After this great meal we all adjourned out to the patio to enjoy the great weather we've been experiencing.  The temps today were up around 75 degrees with a very light breeze. 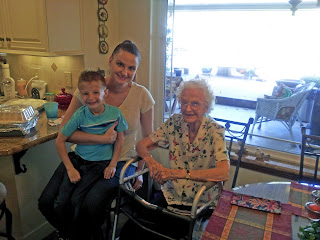 Here are three of my favorite people: Carrie and her son JJ and my mother-in-law, Mardell Priolo.  This was soon after we all arrived and before we sat down to eat.
Posted by Rick Stone at 22:00 1 comment:

Vital memories on a sad day

Today marks one year since my beautiful wife, Joanne, succumbed to breast cancer.  Needless to say, this has been a very hard week. 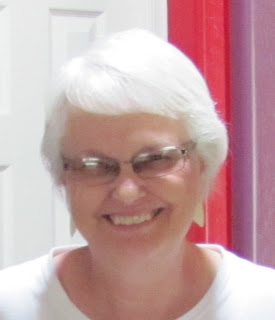 The week started off with my birthday this past Monday.  Although many friends and relatives, including all my kids, sent birthday wishes I spent the day sitting around the house feeling sorry for myself.  Would have been better off getting out and doing something.

On Tuesday I decided it was time to get out of here and see some people.  Went to youngest son's house to spend some time with them during the evening.  His Cathy and her twin daughters all had birthdays this week so I took them their presents.  Alan and Cathy and their three precious girls can always lift my spirits.

Wednesday I picked up my wonderful niece, Carrie, for lunch.  Went to Romano's Macaroni Grill for a good Italian meal.  Spending time with Carrie is also always a great pick me up.  Afterward I was able to spend the afternoon working on cleaning out more of Joanne's clothing and getting it boxed up to donate to the needy.  (I continue to be amazed at the amount of things we accumulate over the years.  So far I've now donated nine very large boxes of clothing to Goodwill Industries and still have more to go.)  On Thursday I took the latest boxes up to the Goodwill Donation Center.

Now we get to today.  I've known for some time this was going to be a hard day to get through.  I also knew that it was also going to be very hard for Carrie.  (As has been posted here several times, Carrie was actually Joanne's niece.)  Sometime back my friend, Jonathan Beck Reed, had given me a pair of tickets to a play in which he was starring so, after a good dinner at Romano's Macaroni Grill, Carrie and I headed down to the Civic Center.  The play was a very intense drama called The Normal Heart.  This play had recently won Tony Awards on Broadway.  This was the Oklahoma premiere of the play and was being produced by CityRep, one of the many local acting companies here in town.  This evening was a good diversion for Carrie and I both.

This week has given me a chance, again, to reflect on the life that Joanne and I had together.  For over twenty-three years of marriage I really cannot fathom being with anyone else.  I have great memories and, fortunately, loads of pictures that we took all over this great country.  We had debated retiring when we did in 1966.  We were both under "normal" retirement age and could have continued to work.  Now, looking back, I am so grateful for those six years we had to travel and spend that time together.
Posted by Rick Stone at 23:00 1 comment: