Another date night with Carrie.

Carrie and I took in another play tonight.  Picked her up at 5:00 PM and headed downtown Oklahoma City.  This time to the Freede Little Theater located inside the Civic Center Music Hall to see a reading of the play "8".  Although the play did not start until 7:00 it was open seating so we needed to be in line early to get decent seats.  Actually, we both prefer to be seated front row center in this theater.  Me because it makes it easier for me to hear and for both of us we have leg room with no row of seats in front of us.  After picking up our tickets we spent a little time in the coffee shop at the Music Hall. 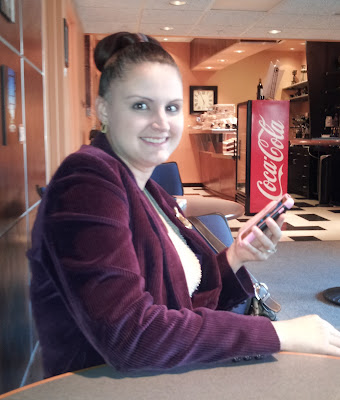 The play﻿ chronicles the federal trial over the constitutionality of Proposition 8 that was passed in California in 2008.  This law restricted same sex couples from being able to marry in the state of California.  It was passed in a general election by a majority of the voters in that state.  This play was presented as a "reading" rather than a full blown play.  There was a minimal set, no costumes and the actors were not in stage makeup.  It was presented pretty much in transcript form of the actual trial.  The actors came from most of the different theater companies located in Oklahoma City and each of them provided their talent for free.  My good friend, Jonathan Beck Reed, was one of the principal players.  (After the show Carrie got a chance to meet Jonathan.) 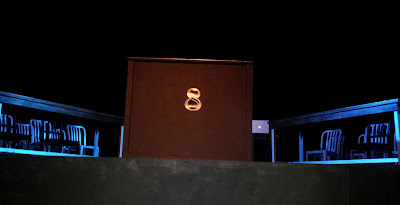 This was a very thought﻿ provoking play and presented both sides of the argument about same sex marriage.  Following the actual play they were having a "talk back" session with a couple of moderators, the cast and the audience.  Since Carrie is scheduled to work tomorrow we felt it best to get her home.

Another enjoyable evening with my lovely niece.
Posted by Rick Stone at 22:30 No comments:

A day with middle granddaughter.

Aurora, my middle granddaughter, spent the day with me.  Her mother had to work and asked if I'd keep her.  (As a grandparent I don't consider the time I spend with any of my grandkids as "baby sitting".)  She got here around 9:30 and headed straight to the toy cabinet.  In the past she has enjoyed pulling all the toys out but never seemed to be interested in putting them back when the time came.  Today was not a problem.  She is now six years old and in the first grade in school.

Mid-morning we loaded into the car and headed south.  Aurora was the only one of my kids or grand kids that had not been down to the cemetery in Byars to see Joanne's burial monument.  It's about a 65 mile drive down there and she sang and entertained herself in the back seat most of the way before falling asleep a few miles before we got there.  She was very interested in the names on all the tombstones, especially the many with the name Stone on them.  We had stopped on the way down to pick up some new flowers to place on "Grandma" and "Great-Grandma"'s graves.  (As has been mentioned in previous post my mother's grave is just two spaces over from Joanne's.) 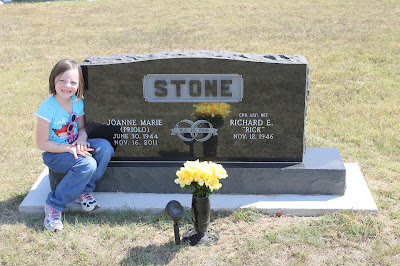 After the cemetery we headed back north.  We stopped in Purcell to have lunch at Braum's and then over to the assisted living center to see "Great-Grandpa".  My dad always enjoys the visits from the little ones.  He always has to find something to give them to take home with them.  He had won a door prize at a recent cookout at the center, a large basket full of different brands of potato chips.  He sent a big bag home with Aurora. 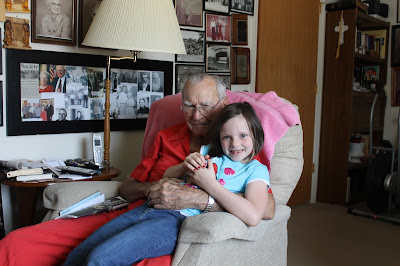 Another night out with my fantastic niece

A road trip, a good dinner and a play...


It was time for us to catch a play again.  Picked Carrie up late this afternoon and we headed up Interstate 35 to the town of Guthrie, the original Oklahoma state capitol.  This is a neat town with many 1890's buildings in their downtown area.  Unfortunately, I misjudged the time we would need to get up there so we arrived in town around 5:30 for an 8:00 PM play.

First stop was at Gage's Steakhouse.  This is located in the basement of one of the old building, in the next block from the theater.  We had plenty of time for a good, leisurely dinner.  As usual, Carrie was all dressed up for a night out and was easily the prettiest lady in the room. 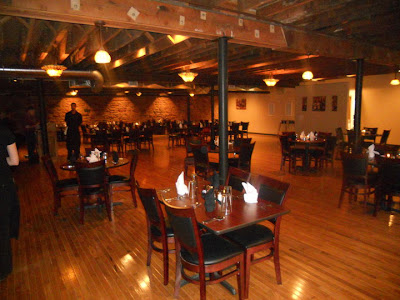 ﻿
After dinner we still had over an hour before the play so we walked around the old Guthrie downtown.  ﻿Unlike many older, small towns Guthrie has maintained their buildings.  Many no longer have the businesses in them that they experienced back around statehood but most are occupied, although by antique stores, small shops and craft stores.  But, like most small towns most businesses close around 5:00 PM, even on Saturday.  Other than the restaurant, the theater and an Irish Pub, everything else was closed while we were there. 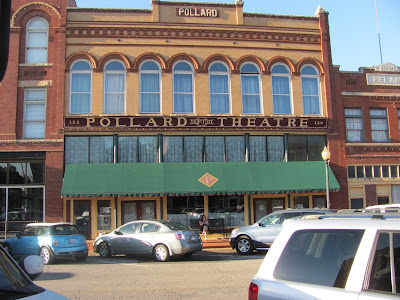 Our destination tonight was The Pollard Theatre.﻿  (That is Carrie sitting on the bench in front, waiting for the doors to open.)  The acting company that performs does an exceptional job and produces several plays each season.  Tonight we went to see "Forever Plaid".  This is a fun show and although I've seen it several times in different venues it is always enjoyable to see again.  The music is four part harmony and was mostly from the late 1950's and early 1960's, definitely the music I grew up on.  This play lasted about an hour and a half with no intermission so we were on the road back south, toward the City by 9:30 PM.  I got Carrie home just a little past 10:00 which is fairly early for our nights out.

As it has been in the past, this was a fun night and we both had a good time.﻿
Posted by Rick Stone at 23:30 No comments:

The Old Germany Restaurant out in Choctaw, Oklahoma, holds an Oktoberfest celebration every September.  They started this several years ago in a tent behind their restaurant but over the years it has grown to the point it had to be moved.  They now hold it in Choctaw Creek Park over in the main part of town.  The celebration, which started this past Friday runs all this next week and through next weekend.  In addition to the food tents, selling authentic German food, several other vendors have set up.  Some were selling conventional "festival/fair" food items and others were inflatable play areas for the younger crowd.

Picked up my niece, Carrie, and her family this afternoon and headed to the park.  Although it was very hot, since the local temperature got up to 102 today, we had a good time.  Got to sample some good food and listen to some good "Oom Paa" bands.  Carrie had said she had never eaten traditional German food before.  She tried the sour kraut and said she liked it.  Her son, J.J., tried it but he did not like it.  Husband John, who is a pretty picky eater, declined to try any of the food. 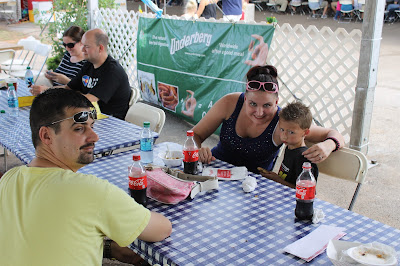 J.J. was a bit hesitant to try out the inflatable toys but finally got into it and did a couple of the slides.﻿  The first time he convinced his mom to go with him. 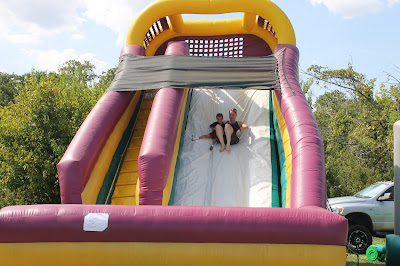 The next time he worked up the nerve to go by himself and this one was even a steeper slope.﻿ 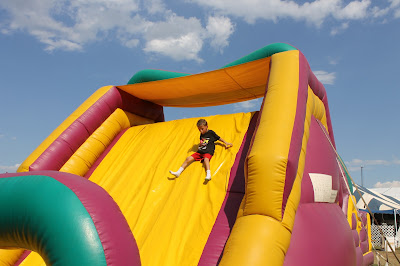 After awhile the heat was more than we could stand so it was time to pack it in and head back to the air conditioned house.  Had a good afternoon with three of my favorite people.﻿
Posted by Rick Stone at 20:11 2 comments: